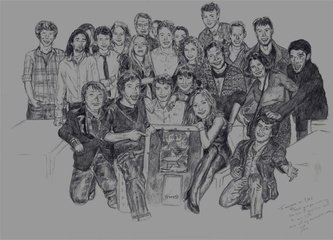 Enormously proud of my time at URY where I helped run the speech team for 2 years and produced comedies, dramas and the weekly review show Yorworld.

The station provided the most incredible platform and confidence booster and hopefully people enjoyed the content that I worked on for the station.

The programmes I helped work on scooped 5 SRAs in all from 7 nominations ranging from Best Interview, Best Speech Programme and the Kevin Greening Award for Creativity and a further nomination for the BBC Audio Drama Awards in 2014.

These all stand as a testament to what can be achieved when a student radio station reaches out to the diverse talents at university and embraces them from musicians, actors, writers and comedians.

Kevin Greening Award for Creativity 2011 : 'The Prince of Humberside' by Tess Humphrey.

Best Speech Programming (Gold) 2013 : 'The New World Order Part 2: Based on the novel by Ben Jeapes

You can keep up to date with what I'm doing now by visiting my website: http://johnwakefieldradio.weebly.com/

Hope everyone in URY is keeping well and she continues to broadcast and launch the careers of many talented broadcasters!